Songs of Praise for petrolhead pioneer and Aston Martin artist 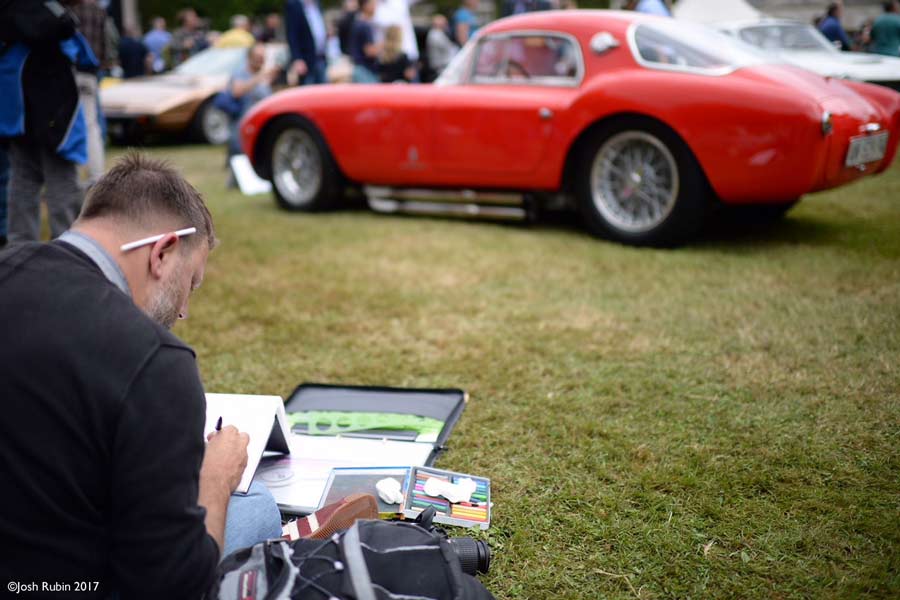 The Rev Adam Gompertz, pioneer minister and creator of REVS, an innovative Christian ministry for classic car enthusiasts and petrol heads, will be featured on Songs of Praise on BBC1 this Sunday 7 October at 3pm.

Adam, who is currently studying with CMS Pioneer Mission Leadership Training, has also been appointed Aston Martin’s artist-in-residence. The role means being at motorsport meetings, model launches and events such as the Goodwood Revival classic car races, where he was interviewed for Songs of Praise by the Rev Kate Bottley.

Adam is a life-long ‘petrol head’ and first came to the attention of Aston Martin when CEO Andy Palmer came across his artwork on social media. He invited Adam to Aston Martin’s factory in Warwickshire for a sketching day and then offered Adam the opportunity to become the marque’s official artist-in-residence.

In July, Adam attended the Goodwood Festival of Speed where he was able to sketch Aston Martin’s newest model, the DBS Superleggera, and experience a ride up Goodwill’s famous hill in a DB11 AMR.

Cars and God have always been an important part of Adam’s life. He says, “My first memory is of a photograph of a 1977 Aston Martin V8 Vantage which ignited my passion.” He went on to forge a career in car design before swapping carburettors for a dog collar and heading to theological college to train as a vicar.

During his curacy, Adam conceived the idea of REVS, an annual car show to engage people in the area who loved cars but had no church background or desire to attend church: “It was a way of relationship-building but once a year could not sustain the relationships we were developing, so we launched the Sunday Service Station, a monthly ‘cars and coffee’ event at a local cafe here in Shropshire, a place where people could stop on the journey of life, grab food and experience community, a listening ear and even prayer. We don’t preach at people – we simply listen and care, and if they just want to talk about their car, then we can do that too.”

REVS has attracted a substantial social media following due to its “Doodle a Day” feature – a daily post of car artwork with an associated reflection, which Gompertz describes as, “Radio 4’s Thought for the Day but with added petrol!”.

Adam has been part of Church Mission Society’s Pioneer Mission Leadership Training programme in Oxford since September 2017. He says that being around other like-minded people has helped him develop his thinking and convinced him of his calling to develop REVS further. “I think cars and mission can fit very well. Car-related themes of restoration, design and creation have a natural resonance. The theme of restoration works brilliantly, as I get to hear some stories of people whose lives have been damaged. Classic car lovers need to know that God loves them.

“I think the future of REVS is about small groups and setting up similar service stations. REVS seems to reach people who I never thought would be interested, and we are currently exploring the possibility of publishing a book of doodles and reflections.”

Revved up for mission