“A lot on my plate” – Interview with Pastor Dupe Adefala 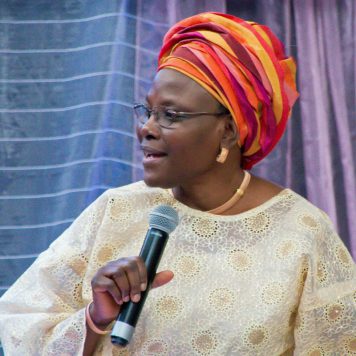 Helen Harwood talks to Dupe (Modupe) Adefala, MA student at Church Mission Society and a woman who admits “Without a doubt, there is a lot on my plate!”

HH: Dupe, there is really so much to ask you as you seem to have had a very varied life. I’d like to start back in the past and ask you about your upbringing, faith and also the fact you say you were a Chevening Scholar (Women in Management) and what this has meant for you?

DA: I was born into an Anglican family as the first child of 11. My father had two wives (my mum was the first). My father worked for Nigerian Railway Corporation. My mother trained as a teacher but I knew her as a trader and politician. I attended St James Primary School followed by five years of secondary education at Queens School (both at Ibadan – Nigeria).

I worked as an accounts clerk at Nigerian Railways while waiting for admission to the university which did not come through and after about 18 months, a relative nudged me to further my education with Ogun State Polytechnic. I was a pioneering student. I finished a four year Higher National Diploma in Accountancy with distinction. I was the pioneering Student Union vice president and finished my term as president in 1982. I was assigned to Parke Davis (a Pharmaceutical company later known as Pharma-Deko) for my compulsory National Youth Service based in Lagos. My services were retained and I rose through the corporate ranks of the company till 1995 when I resigned as chief accountant and company secretary.

I got married in 1984 and qualified as a chartered accountant in 1985.  It was in the course of attending a management training that I met Philippa, a course facilitator who recommended me for a Chevening Scholarship! It was a game changer! It was at a point in life when I was in despair but God intervened and plucked my feet out of the miry clay! It was both a turning and tipping point for me. It was also during the training “Women in Management” at Regents College that I first put on a “gender lens”. Seeing the world through gender equity and gender equality sensitivity has helped me hone my worth and empower other women (including the younger generation) without neglecting the men.

I must add that I became born again in 1988 at an Assemblies of God Church in Lagos. I worshipped with them till 1992 when I moved to another independent Pentecostal church (Living Word Household) which had just started based on my husband’s preference. He converted from Islam in 1992, although he was more of a ceremonial than practising Muslim. It was at this new church that I trained as a bi-vocational pastor (I was in full time paid employment as an accountant while serving as pastor, assisting the senior pastor). I was ordained in 1996.

Could you tell me something about your relocation to the UK in 1998?

1998 was another pivotal year in my accountancy career and calling. I was sponsored to attend a special Sun Systems (accounting software) training by my employer (Carnaud Metal Box). It was a pioneering effort at systems implementation at all their African sites. I submitted a report (which I believe was promoted by the Holy Spirit) at the end of my training. On reading my report, the international finance director decided to appoint me as the project manager! I was not required to write a report but the Holy Spirit inspired me and helped me to demonstrate how the systems implementation could be achieved across the departments (manufacturing, HR, facilities, logistics and finance) as well as across national businesses. It is still beyond me but I spent four years on the project coordination. I visited Zambia, Zimbabwe, Kenya, Tanzania, South Africa and Nigeria.

I thought the role was going to be based in Nigeria. However, I was requested to relocate to the UK. The company offered me a work permit which entitled my husband and three children to come with me. When I complained that it was going to be expensive raising my children through child care, I was given the rare privilege of bringing my sister with me as a student so that she could support us! All relocation expenses paid, accommodation and car were also given.

I recall that at my valedictory service, a brother had remarked that like Abraham, it was God’s platform for me to serve him in a land that I know not. I visited in October 1998 to secure accommodation, schools, GP, etc. We all arrived at Heathrow on the very cold night of 24 December 1998 and settled at Wantage where the UK office was based.

I know you have worked at the Immigration Removal Centre, can you say a bit about your work with that organisation?

I lead the multi-faith chaplaincy team to support about 300 men from about 40 nations and different faith groups, who are being held pending decisions on their immigration status. It is a very diverse team with everyone committed to the dignified care and custody of the men. It is a privilege serving the men; shining God’s light in the midst of darkness; offering hope in the midst of despair. I have had some spiritual and ministry shaping encounters at the centre.

Now you a are a pastor in Cowley, can you give me some of the highlights from Love Oxford and your ministry here?

Serving God in Oxford has been the fulfilment of a prophetic encounter for me. Word Fountain Christian Ministries was birthed on 5 August 2002 with three families (about 13 members). Called to present God’s Word to his world, we seek to reach various people groups directly or indirectly. We are involved in social action through Family Arena holiday activities and adult learning. Oxford Pastors Forum and Love Oxford are umbrella ministries through which we connect with the wider body of Christ. Love Oxford has been a hub for over 40 churches and their leaders to pray and bear witness of the resurrected Christ openly! The relationships forged have strengthened our sense of belonging as a community of believers.

I have been given the opportunity to speak at the open air events as well as prayer gatherings.

I have taken part in Meetings for Better Understanding (Christian/Muslim dialogue), MAHABBA, etc.

What drew you to pursue the Master’s course here at Church Mission Society, and how have you found it?

The fact is that I was not actively looking to classroom learning. I thought that I had no space to fit it in. However, in 2015, Colin Smith sent me an email asking us to meet (I don’t remember the subject exactly). One thing led to another and he introduced me to Harvey, who told me about the training and organised for me to meet Cathy. The recruitment style of the Pioneering team is unique! I liked the prospect of personal development following my Advance Diploma in Biblical and Theological Studies (ADBS) from Regent’s Park College in 2007. I was convinced that the modules were relevant to my engagement as a pioneering minister and the ‘bite size’ approach as well as cost and payment plan would be manageable. The opportunity of meeting other pioneers and learning from them was too good to resist. ‘CMS’ was a well-known ‘brand name’ to me from Nigeria (as a school and popular bus stop in Lagos); I had no clue of its training, supporting and equipping of missionaries or connection to the Anglican Church.

I was privileged to have been invited to attend the opening ceremony of the building when CMS moved to Oxford and I recall my admiration of the setting. I felt drawn to learn from its rich heritage and to contribute in my own little way to its ongoing story.

What does the future hold and how we can pray for you?

Thank you very much. I give voice to Paul’s admonition, “Having done all, to stand.” Without a doubt, there is a lot on my plate! My prayer is that God will help me consolidate both the learning and experience for his greater purpose as the global church moves into a new phase of reformation. Please pray for strength and grace to complete the course and other responsibilities at hand with sensitivity to the Holy Spirit as to what God will have me do.

May I seize this opportunity to express my gratitude to you, my tutors and all facilitators at CMS (including the Library and Welcome Desk). You all make coming and learning a joy not a chore!

Thank you Dupe, for your kind words and your inspiration. Bless you.

Pray: please pray for Dupe, for all she has on her plate; her mission, her family, her congregation and her big plans.