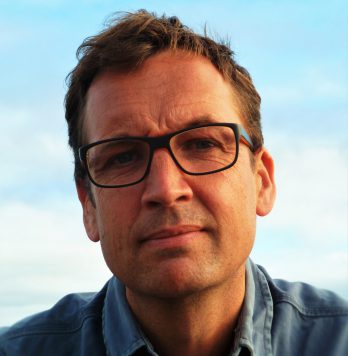 As January turned to February, Paul Bradbury started his new role supporting pioneers across the south of England, based with Church Mission Society. Jonny Baker asked him about his own pioneer journey and more about what this role involves.

JB: How did you get involved in pioneering?

PB: I first used the word pioneering about myself when I applied to work for a year, after graduating from uni, with a mission agency in Kenya. The scheme placed people in pairs in schools across Kenya. I was placed on my own in a remote school that had never had a teacher from the UK before. I ended up running the school Sunday service and starting a hockey team in the school. So that was an early taste of pioneering.

I was then involved in church plants in London which were focused on mission. But my call towards pioneer ministry emerged more strongly when I was a curate in a fairly ordinary parish in Southampton. The disconnect between most parish activities and the majority of people at the school gates weighed heavily on me. I had a generous incumbent who let me try stuff out. The most significant project I led involved us taking over a disused shop in the area, transforming it into a gallery space and running an exhibition that told the story of the prodigal son. That experience affirmed a growing sense in me that my future lay somewhere other than parish ministry and that pioneer ministry (which by then had become a category for ministry in the Church of England) was where I wanted to explore my calling.

JB: You clearly did do exactly that. You are involved in Poole Missional Communities which you set up as a pioneer. How did that get started and can you tell us a bit about it?

PB: Poole Missional Communities is a charitable company that was set up to oversee the ministry that developed out of my appointment as a pioneer minister in Poole in 2008. That appointment started life as a creative response the church made in Poole to the challenge of regeneration in the central are of the town which promised to increase the population substantially. The then archdeacon argued for a more imaginative approach and sought to appoint a pioneer minister.

After my arrival, my wife and I set about listening, praying and getting to know people. At the end of that first year we gathered a missional community called Reconnect. That community has since initiated a whole range of missional projects aimed at connecting with unchurched people in particular, the community now numbers about 60 adults and children.

Poole Missional Communities is now also developing ways of inspiring and supporting pioneer ministry locally. We host a learning community for leaders of emerging churches and their teams which now has six different expressions involved in it. We have a project called Breathing Spaces which is trying to encourage and support other churches in connecting with spiritual seekers. We host workshops and conferences aimed at encouraging imaginative missional thinking.

JB: That’s good going – I reckon it takes about 8-10 years to get something flourishing in the way you describe. A lot of churches or dioceses who employ someone to pioneer something seem to expect results unrealistically fast in my experience. I guess it’s one area in which we all have a lot to learn along with many others.

This brings me on to your new role. The region running from the edge of the M25 near Guildford to the south coast along to Poole, out towards Portishead, up to Milton Keynes – ie, a big area of the central south (which we call the South Central Regional Training Partnership) has put money into a pot to support your role for two days a week to encourage pioneering mission and ministry. We’re really delighted that you are joining the team at Church Mission Society for this. It’s a huge area really – how are you going to set about the task?

PB: That’s a good question! Andy Freeman has done a great job pioneering this pioneering role. Things have moved on a great deal in the past five years though, with more pioneers and also some support roles now in place in some dioceses. So while there is still an important place for supporting pioneers I think there is perhaps a bit more of a tilt toward advocating for pioneers and pioneering across the region. That will involve telling stories of good practice and also getting practitioners and policy and decision makers together to listen to one another and generate the way forward together. There are some key themes that are clearly emerging in the landscape of pioneering, notably pioneering on new housing estates, and lay pioneers, that I think we may well do some focused work on. But I guess like all good pioneers I’m starting by listening, getting a feel for the area, working out who is out there, doing what and in which contexts, and seeing what issues emerge.

JB: Thanks – we’re excited about your appointment and look forward to you being part of the team and seeing how it unfolds over the next three years.

I won’t ask you about this as it’s kind of awkward to plug your own work but you have recently written a book Stepping Into Grace which explores the journey and call of a pioneer by looking at the story of Jonah. I thought it was a really helpful and delightful book so anyone reading go get yourself a copy!