Last Friday evening we celebrated at the Upper Room as five people were baptised and/or confirmed from our community and Bishop Michael of Gloucester conferred a Bishops Mission Order upon us. This makes us officially a part of the Church of England, whereas before we were independent of any denominational affiliations. It may seem like a very odd move, for a project that had its own charity status and finance already in place, and so perhaps that requires some explaining.

We were established almost six years ago by four women who between them represented three different churches. The church that may have been the obvious sponsor of this mission project declined to be involved. A second church offered to consider if we were to be one of its ‘spokes’ but this too came to naught. After a while, we ceased to notice and just carried on doing what we felt God was leading us to do, which was to offer a space where people who were far off from the edges of church could explore faith and spirituality and receive prayer and a sense of belonging. We were hoping to ‘show and tell’ the Gospel message, and to bless and care for struggling people in practical ways. This was enough to keep us out of mischief and the question of whether we were or weren’t a part of the church in any broad sense was not high on our agenda.

A few years later, we had our first part time staff member and some other new leaders and together we began to ask the question whether we should give up going to the various churches we attended and meet together to worship on a Sunday at the Upper Room. Up to that point our activities had taken place on Mondays and Fridays and we had considered them part of our individual offering of worship to God. At around the same time, a new vicar came to one of the churches in the town and he joined the Street Pastors team that operated out of the Room on Saturday evenings. We decided to approach him to ask if he would lead us in an occasional communion service, which over time turned into a monthly communion service followed by a community lunch. 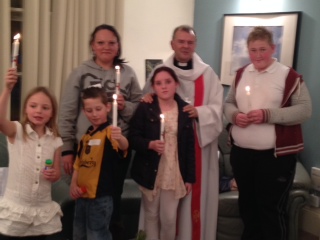 So I guess we officially and publically began to offer formal public worship at that point and others gathered to join us. The people who came along to other activities at the Upper Room quickly gravitated to these times of worship and ate up the rituals offered, along with the obligatory quiche. We began to go together twice weekly with our folks to the brief midday communion service at the Parish church and get to know the team of vicars that led the services there. Then Archbishop Rowan Williams came to visit us last year; this made a deep impact upon many and people began to ask to be baptised and confirmed, much to our surprise. As post-moderns, and also some of the team recovering from hurt and disillusionment with church, formal liturgy and religious ritual was not at all on our agenda, but the truth is when you set something up to serve a people group who are unchurched and they ask for liturgical rituals and find deep meaning and resonance in them, you have to decide if what you’re doing is about what you want personally, or if you are willing to be the servant of what the people want. Sometimes our call is to die to ourselves and our right-on ideas and listen to what the people we hope to reach are asking for, and this has been our experience. Of course we wouldn’t say this is what everybody should do, and we know many new start-ups have had a much more difficult time trying to build ridges than we have. The Church of England is by no means perfect and we are aware of the potential domestication or commodification that could threaten our creative mission.

The reality is we have grown towards the Church of England over some years as relationships on the ground in the parish have been slowly built and invested in; at times this has not gone well, there have been misunderstandings and we have had to re-group and try again. At the same time, the people we journey with have responded positively to reimagined and adapted ritual and liturgy but in our very different setting, which has spurred us on. And our team here have been blessed by the grace shown to us by the Church and have felt the convergence of spirit and relationship that has culminated in the Bishop issuing us the first Mission Order in the Diocese. This is a bit of legislation enacted out of the Mission Shaped Church Report 2004, which allows us to join the body of the CofE but gives us freedom and elbow room to breathe and space to keep our missional identity and purpose. We don’t report directly to the parish but gather around the Bishop; we maintain our trustees, charity status and financial independence. (We do not receive any funding from the Church of England, just to allay the fears of some who accuse fresh expressions of leeching resources that ‘should’ belong to the parishes! Nor do we pay Parish Share.)

As we are studying Ecclesiology at CMS on our Pioneer Leadership MA this term, I have been really fascinated to consider the question of when we stopped being a ‘mission project’ and became a church – indeed some people locally are still unconvinced we are a church at all! I guess I feel that at conception, at the twinkle in the eye of God when he planted the dream in a group of housewives, he saw this as a part of his body, and that it has been an almost six year journey for that to become consonant and allow us to grow towards it. For me, when the Bible is shared, along with prayer and Communion, then relationships start to grow and develop and by the Holy Spirit transform us and others, then that is church.

How this will work going forward, and what God will do with it, I am unsure. But we have journeyed along together, seeking to be open and follow the wind of the spirit and this is where we have unexpectedly found ourselves. When you are the servant of a call from God, you have no certainty it’s going to go where you expect or want, but you have to keep saying yes, one step at a time, even when it really doesn’t feel like what you signed up for. So, please pray for us as we embark on this next stage of the unexpected adventure!