Vision in the tea leaves 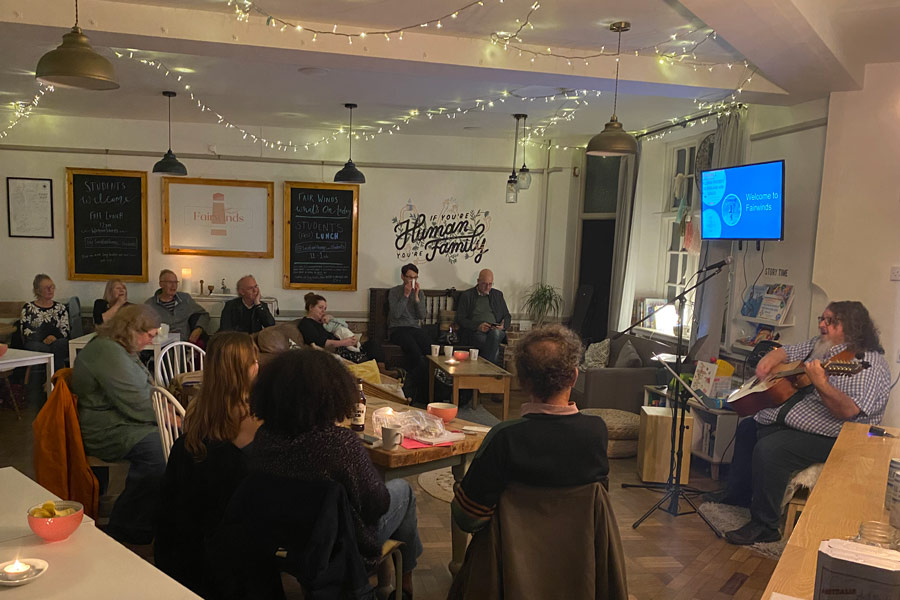 Tasked with turning a cafe space in Falmouth into a centre of mission, Ben Hudd, a graduate of the CMS Pioneer MA programme, explains that all he could do – and all he needed to do – was listen.

In fairness, the vision for Fairwinds Community Hub didn’t actually come from reading tea leaves, however perhaps it does signpost two key elements to the ongoing (and never ceasing) process of discernment; listening and watching.

Re-envisioning a cafe space in the centre of Falmouth as a ‘Centre of Mission’ with a specific focus upon ‘being with’ the poor, excluded, marginalised (forgive the term) and de-churched community with a tiny budget (£100 a month) and no initial dedicated team seems classic CMS stuff; who would have it any other way?

Brother Lawrence I think coined the phrase ‘studied neglect’, a time in which, counter to perhaps a prevalent culture of ‘doing’, you simply ‘do nothing’ but watch and listen. I chose six months of inactivity as starting point to give space for old visions and expectations to die.

Fasting from the distractions that can present themselves in the early days of any pioneering venture – such as the temptation for quick success or being blinded by the seemingly obvious – is as unpleasant as not eating, but it had to be done.

Just one night at the Cornish Bank, the club opposite, built over what was the Museum of Witchcraft, yet ringing a clarion call every night for social justice and societal change, was enough to present a panorama of the challenges facing the church in the 21st century. How does it feel to sit anonymously in the midst of righteous anger (all be it expressed un-righteously) and realise that you represent elements of the very power that truth is being spoken to?

Days spent sitting sharing lunch with street sleepers, listening to the cries of rejection from sectors of the community that have been pushed to what we see as the margins but now form the centre of a very different and rapidly shifting culture, were more than just informative; this was holy ground, this middle class white guy didn’t belong.

Completing a masters (I highly recommend it) at CMS brilliantly prepared me to be comfortable with the discomfort of listening to the neighbourhood in places that are contested and contradictory, and in ways that take the time to listen well and allow ourselves to become broken enough by what we experience to lift the veil and see God at work in places that, like the Pharisees, we often find so difficult to accept.

And so when envisioning Fairwinds in order to find a starting point (for vision is so often just that) with those that had joined me on this journey from the most unlikely of places, and from across a wide breadth of church traditions, my priestly call to be a sentinel, breaking the silence of oppression, ignorance and apathy (in Archbishop Stephen Cottrell’s words) became the dominant tone, driving a vision for seeing compassion and justice right at the heart of who we would be, echoing what the stones on the cobbled streets of Falmouth were already crying out.

So how do you start? Well after six months of neglect I opened the door and in walked a young person, in their 20s, who asked if they could have a cup of camomile tea. As we sat together, alone, with the door open to the bustling Falmouth High Street, I listened to their story. Thirty minutes later, after having listened to them offering their life to Christ, I realised that I had just witnessed the incarnation of a vision that has been slowly rising like the Cornish tide: “Listen!”

Thus ‘The Listening Post’, our Tuesday and Thursday drop-in was born. A warm space where this week, my eclectic team of post-church, de-churched and love-church followers of the Way sat and listened, talked and ate toast with those from the highways and the byways, the street angels who are just waiting to be entertained.

Gospel making itself at home

Veterans, the lonely, the elderly, the homeless, in fact anyone who wants their voice to be listened to, not just heard, join the conversation around the long kitchen block table. Each one a psalmist in their own right, creating a narrative from their suffering that welcomes the presence of the God who understands.

And sandwiched between these two slices of wholesome gospel goodness sits the St Anthony’s Community that, over soup and more tea, is there to listen to students, partnering with Just Love Falmouth whose student Christian community embodies our call to Isaiah 61 in ways I have only perhaps glimpsed before.

Perhaps our launch says it best, an open mic night with a theme of Justice and Poverty. Jayne Kirkham, our local councillor, came and spoke about her heart for justice for the most disadvantaged and how we can all work together for the community. There was a performance of Tony Walsh’s poem ‘Poverty is Many Things’ and a poem about being an LGBTQ Christian. Not forgetting some memorable Billy Bragg cover versions, ‘remastered’ to reflect the Christian message of downward mobility.

Contributions from the community and church alike contextualised a gospel that was always for the people, because God came to be with the people.

Ben Hudd is an ordained minister in the Church of England, a member of the Archbishops’ College of Evangelists and has just completed a masters in Pioneer Ministry with CMS. He lives near Falmouth with his wife and four daughters.