Go, set the world on fire! – interview with Shane Tucker 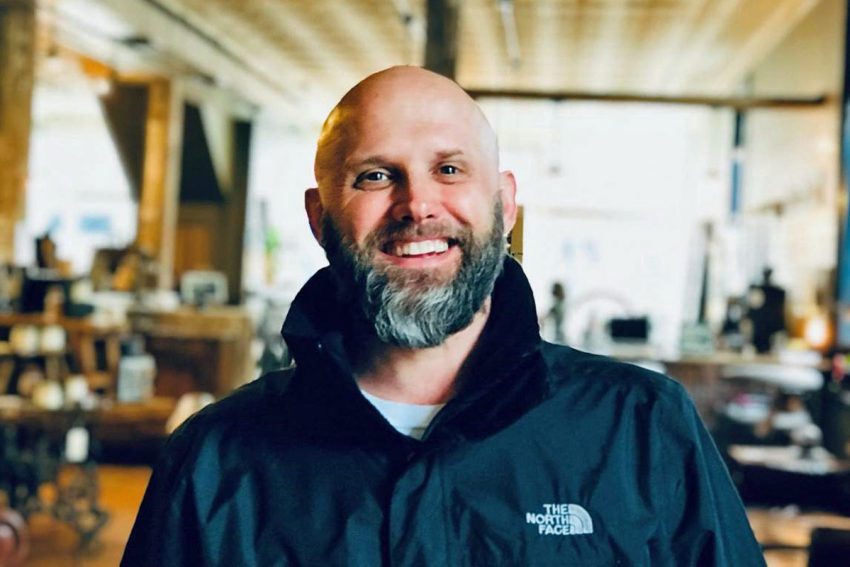 Shane Tucker, a year one MA student, has lived and worked in Ireland and the USA, ministering to creatives, doing youth work, and being a soul friend. I talked to him about his rich and varied life as a follower of Jesus.

HH: I know you have an insatiable appetite for adventure and travel; plus, with your wife, Christy, you have four children and they were actually born in three different countries! So, you must move around a fair bit. Can you tell us a bit of your travels, please?

ST: Christy and I are from Ohio, an area in the US known as the Midwest (confusing when looking at a map!) where we met at 16. We both attended Uni in Indiana and were married before our last year. After graduation we moved to the outlying area around Chicago, Illinois to take up a student ministries internship with Willow Creek Community Church. When that opportunity ended early, we were told of a Presbyterian church in Northern Ireland who were looking for a youth worker. After a visit and applying for the post, we were called and moved there in 1999 with only our clothes. Five years went by as we both worked with students in various contexts, and we started a family. Our eldest two children were born in Northern Ireland.

Following serving as a local youth worker, an opportunity opened to take up a national role with the Church of Ireland Youth Department covering the Republic of Ireland. That post led us to relocate to a small village in Co. Tipperary from which I could travel around the country to reach and disciple young people, equip and empower youth workers, and encourage the church to better posture itself in meeting the needs of young people. It was there we welcomed our third child into the family.

During my six years in that role, I studied with the Irish Jesuits in spiritual direction to discern a call to pastor artists and creatives, which eventually led us to relocate to Nashville, Tennessee in the States. Before leaving Ireland, we launched a not-for-profit called Soul Friend which offers soul care (pastoral care and spiritual direction) to anyone who desires it, with a special focus on artists/creatives and their families. While in Nashville I was ordained as we helped plant an Anglican church from a podcast called the Daily Audio Bible, and developed various missional endeavors including a coffee shop and a performance venue for artists to rehearse and perform in. After eight years in Nashville, we moved again, landing in Ohio, where our three children could live nearer family (a first!), and we could welcome our fourth child into the family (at 42 years of age!). I now serve as an associate priest in an Anglican parish north of Columbus, Ohio and as canon for our diocesan NextGen Movement, in addition to my work with Soul Friend.

How does your career in event management, booking and promoting gigs with bands and artists play into that moving around, did that make your work harder or did you need to go where the work was?

I began to become aware of the call to invest in artists/creatives after graduating from Taylor University in 1998, where over four years I had worked with bands/artists that came to play at the Uni. That desire strengthened and clarified over time, even to this very day, and found expression in each place we’ve lived and served. That passion never really was a deciding factor in taking up a new post until we discerned the Lord leading us to launch Soul Friend and move to Nashville, TN – with no home and no job – to partner with a couple who had been pastoring artists/creatives for 30+ years. When we arrived, and really the entire time we lived in Nashville, I worked various jobs to take care of the family while establishing Soul Friend, and serving as one of the priests in our church plant.

I know our readers would love to hear about your not-for-profit enterprises. Tell us more about Soul Friend?

Soul Friend is the anglicized form of the Gaelic phrase “Anam Cara”. Soul friendship is the historical expression of spiritual direction in Celtic lands. In my opinion, soul friendship is often different in character and practice from what may be implied by the somewhat misleading phrase “spiritual direction”. That more recognizable phrase can appeal to a dualist perspective (compartmentalisation) by employing the word “spiritual”, and also connote that the “director” is out in front, ahead of the directee showing them the way to go, or telling them what the Lord wants to speak to them. Whereas, the type of relationship between soul friends is like two people walking side by side along life’s road. This is best illustrated in the biblical account of the road to Emmaus as told in the Gospel of Luke (24:13–35), where these two friends were unpacking the events of life in recent weeks, and suddenly, Jesus shows up! One approach hinders the highest good – to empower each person to hear the voice of the Lord for themselves – and the other facilitates it.

You have a passion for seeing people “live fully alive”. Can you say more about what it means to you to become “who Our Father created us to be”, and “…doing what He has gifted us to be about.”

Actually, I began working with artists and bands many years before I trained in spiritual direction with the Irish Jesuits, and have continued to dabble in work with artists/creatives in various capacities throughout my journey. The phrase “live fully alive” harkens back to St Irenaeus’ line “The glory of God is man fully alive, [and] the life of a man is the vision of God,” which points at humanity’s purpose, and source – the Author of life himself! St Irenaeus was only a few generations removed from Jesus Christ (Jesus/St John/St Polycarp/St Irenaeus), and thus may have been keenly influenced by Jesus’ challenging invitation in John 10:10, “I came that they may have life and have it abundantly” (ESV). Simply put, I believe the only way to mature into the person Our Father created us to be and calls us to become is through an ongoing, authentic, trusting relationship with Him.

It’d be good to hear how the course has benefit you so far?

I was particularly drawn by the fact that CMS was offering an MA in Theology, Ministry and Mission with a Pioneer focus. I’ve always been drawn to the edges and fringes of movements, institutions, and even geography. Ireland was referred to as “the edge of the world” by the Romans! I think that’s one of the reasons I’m passionate about the arts and working with artists as well, they occupy that liminal space within society, simultaneously inspiring and challenging those who care to engage. I’ve followed and participated in the pioneer/fresh expression movement since its inception because I believe in the value of offering another ‘other’ voice and perspective, inviting people to discover previously unknown inner and outer landscapes. I’ve enjoyed the challenge, engagement, and exchange the MA has provided thus far.

It seems books play a part in your life, you describe yourself as “a Tolkien geek through and through” and I know you enjoy his fellow Inkling, C.S. Lewis, very much – can you say a bit about how books have inspired you, have they kept you grounded or made you fly?

I do love books, but if I’m being honest, I have a very hard time sitting still long enough to read them – and I tend to read slowly. I seem to collect books (especially old ones) faster than I read them. However, so as not to tire of one too quickly, I usually have quite a number on the go at once. They both ground and inspire me. I think I’m most excited about the process of connecting the dots which often happens while reading and reflecting as a new idea fertilizes a pre-existing idea, and an entirely new understanding is birthed. It’s those “a-ha” moments as one of my uni professors called them. Besides these new discoveries, I guess I’m always on the hunt for the numinous, and I do get quite a bit of that in many books… not least Tolkien and Lewis.

Lastly, Shane, how can we pray for you, your family, your work, and of course, your study.

Thank you for asking! Honestly, I think I’m in one of the most frenetic seasons of my life, and while I enjoy it at one level, it’s exhausting on another. I’m not good at slowing down to be still, to be silent, to listen, to rest and to dream. The Spirit is constantly inviting me to do just that. Please pray that I will to be still, be silent, listen, rest and to dream more often.

Please pray for protection over, and sheer joy within, my family. I’d also take a bit of prayer for focus and discipline… it’ll never be wasted. Thanks so much!

To end, here’s a little encouragement for all of my fellow Pioneers via St Ignatius of Loyola, “Ite Inflammate Omnia”: Go, set the world on fire!