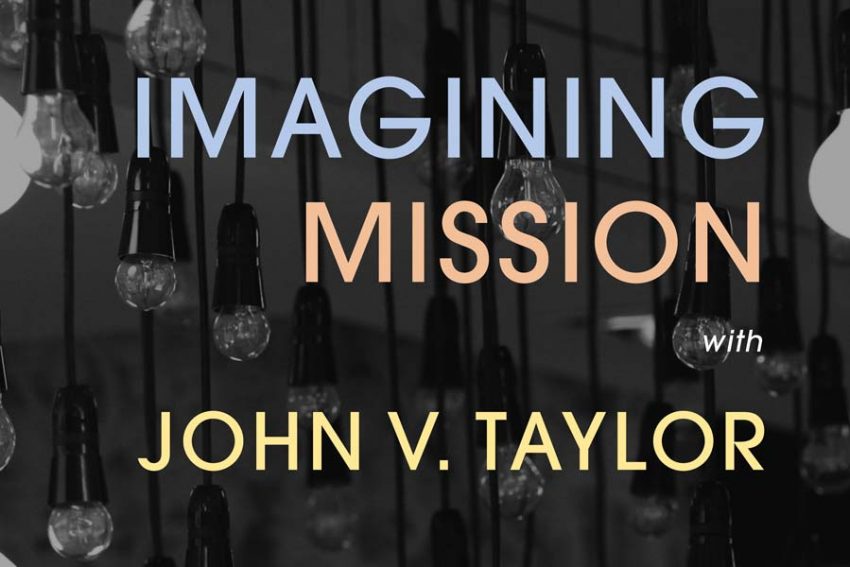 Gill Poole, a former long-time staff member of CMS, used to bump into Bishop John V Taylor on the streets of Oxford during his retirement years. She hopes many more people will have the chance to ‘bump into’ this personable and humble radical through Cathy Ross and Jonny Baker’s recently published book Imagining Mission. “It could be the handbook we need to stop fixating on theology and start finding our mission,” says Gill. We thought we’d publish her review on John Taylor’s birthday.

Jonny Baker and Cathy Ross set out to reopen the treasure trove of the late John V Taylor’s writings on what makes for realistic mission. They have delved deep into Taylor’s CMS Newsletter articles and his personal diary during his 11 years leading CMS, as well as some of his later writings. And the treasure they have unearthed and put alongside their contemporary experiences offer release, hope, guidance … and yes, some helpful challenges … for the church and individuals to live out mission in the 21st century.

Over the course of a decade, Baker and Ross have unpicked the minutiae and inspiration of Taylor’s reflections and references, learning about the source and original understanding of the core elements and context. Part of the genius of their book is that, in Taylor’s style, they have used accessible imagery and linked it to scriptural, academic and scientific references without pushing the average reader out of their depth. With their expanded appreciation of John Taylor’s wisdom and their own excitement about sharing Christ in a way that liberates and empowers all people in today’s world, Baker and Ross have then woven the particles back together to present all the crucial ingredients in imagery that is meaningful to today’s language and mindset. The authors wanted to provide “a springboard for reflecting on mission today”. They have also spread out a beautiful carpet of inspiration for us to walk on.

The Intro chapter explains what has inspired the authors, and helpfully sets out a framework so the reader can recognise specific areas of focus. You will have noticed from the title that the overall emphasis is on using our imagination. The book is set out in three parts following Taylor’s most common themes – Church, Mission and Society – and each part has two sections, all of which have been given enticing titles. The content is invigorating too.

Throughout the book there are wonderful perspectives that invite you into the conversation. “Leap over the wall or perish” is the Taylor expression that Baker has aptly given to his opening chapter, and this is perhaps the most urgent message for our time. Bringing to life the seminal insights of John Taylor’s thinking on Christian life and witness, Baker and Ross reflect on his observation of the church’s ‘stuckness’, adding the astonishing point that this and many of Taylor’s other observations were made at least 50 years ago, and yet seemed to have had no noticeable impact then or since. Taylor’s critique of the established church’s failings centres on its underlying mindset of institutional control, instead of Christlike radical liberation and empowerment of God’s people within every social and ethnic context.

The chapter on training and theological education, “In the Name of Christ the Innovator”, draws on Taylor’s experience of heading up a theological college in Uganda, blended with insights from Baker and Ross’s current work in training for pioneer mission leaders. The focus is all geared to “Becoming Unstuck”.

When critiquing inherited false concepts, Taylor has an attractive way of using down-to-earth imagery to make true mission concepts clear and bring them to life. There are so many delicious, vivid expressions shared from Taylor’s original writing. For example, in the chapter “Cherish the Weakness of Limited Means”, we learn that Taylor offered five secrets of rejuvenation (for mission movements) and had three core values for living out mission. These three are Mobility, Picnicity and Particularity. Intriguing! They are explained briefly and concisely, and the implications unpacked for us.

The chapter “Enough is Enough!” draws out the limitations which the institutional church doesn’t realise it is living with; and the truth that ‘the current system is broken’. Baker and Ross comment that “Theology for Taylor is living, functional and practical.” As observed, the Church of England is unwittingly locked into perceptions and mindset of another era – so it is losing life, energy, relevance. And the ‘stuckness’ is what Taylor was urging the church to recognise over half a century ago, and to change its mindset. For five decades his and other voices have been telling us enough is enough and that, in life generally, targets of ‘growth’ and ‘progress’ can work against universal flourishing. Baker observes that “Progress has turned out to be rather like the gods of the Old Testament who seem to offer so much but whose ways lead to death rather than life…” Rich with illustrations, the chapter references various writings that highlight the issue. Like Rowan Williams writing in 2016: “Accept the diseased imagination of the culture we have created and the death count begins now.” Perhaps a full dose of Baker and Ross’s book could be the right vaccine against that.

Drawing on relevant authors and scholars, Baker and Ross give us insights from many sources. The chapter “The Yeast of Nonconformity” focuses on interaction with other faiths and offers a kaleidoscope of practical approaches that can bring unity, not division. I share the authors’ love of the idea from earlier CMS missionary, Temple Gairdner, of the ‘song note’ being integral to joyful and tender witness. (I also love the fact that this happens to be on page 139, and reminds me of the tender, nurturing verses in the Psalm of that number!)

The book brings home the truth of the universality of Christianity. It is not owned by any one culture. In her introduction, Ross says how she loved reading Taylor’s travel diaries which were informative and inspiring. From these come insights into the different ways, understanding and needs of local cultures. This resonated with me because of the enriching experiences I’d had from time spent with Christians in Uganda, DR Congo and Pakistan during my years with CMS: the menial status of Pakistani sweepers, most of whom are Christian by heritage: in the plains of equatorial Africa, what does something look like when it’s ‘washed whiter than snow’? And for years I had doubted the acceptability of a married couple keeping different surnames … until I learnt about indigenous peoples in equatorial Africa where it is entirely UNacceptable for a woman to take her husband’s family name.

Bumping into John Taylor in Oxford from time to time during his retirement years, I always found it a joyful encounter. He was a humble, personable man, and Baker and Ross have shown this in their thoughts on his writing. The criticisms he makes, which Baker and Ross are constructively bringing to our attention, don’t come across in a nasty, ‘holier-than-thou’ way. As Baker states “He has a freedom about him. It is not arrogant, but it does not feel as though he is overly concerned about what others might think.”

“Mission is not a subset of theology” said Philip Mounstephen in 2018 as he reflected on his own years as Executive Leader of CMS. And this is what David Bosch argued in his 1991 book Transforming Mission: Paradigm Shifts in Theology of Mission” quoting Khaler “Mission is ‘the mother of theology’”. Baker and Ross’s publication could be the handbook we need to stop fixating on theology and start finding our mission.

“It is all about Jesus and it is all about mission”, the authors say of the book. You will find scripture is the foundation of the book, and ideas for engaging in mission are developed with insights from sociology and anthropology, and using inspiration from the arts to help motivate us.

Concepts like dissent, risk taking, nonconformity and dangerous openness radiate from the book as attitudes we should aspire to, and if you put yourself in Christ’s shoes, you can see how this makes sense.

What Baker and Ross have done is to bring Taylor’s compelling scriptural insights about true mission back into focus, with added comprehension and urgency. In their pioneer mission training and development work of several years they have been testing, rediscovering and proving the firm truth in which Taylor’s work is rooted. Baker and Ross state that they have been “enlightened, enlivened and enriched” through their work with Taylor’s writings, that “he sparked their imagination afresh about mission” and clearly they will keep building on it. They offer reflective exercises with each chapter to help us do so too.

Baker also says that, following some of his study of Taylor, he felt “inspired to be free, to speak from the heart, to speak boldy” at a Christian conference, and that “we have tried to carry that voice into this book and hope that you might experience the same emboldening through reading it”.

I think that they have. And let’s hope that we all will.