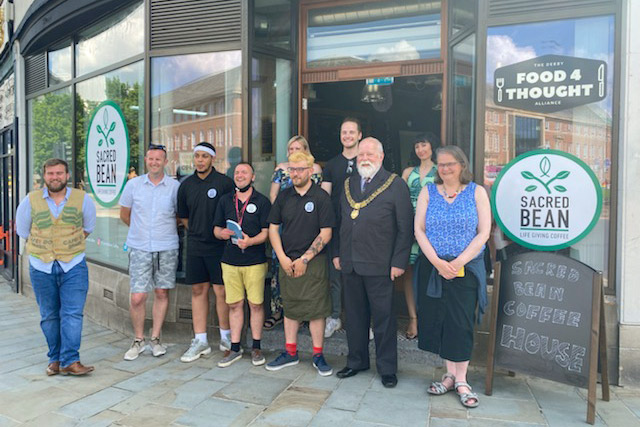 Theory into practice: the new Sacred Bean coffee shop in Derby is a business promoting justice and the environment

Sarah Clarke, undergraduate programme leader, introduces the module Justice, Environment, Mission in a Global Context, along with a recent case study of putting the theory into practice. It’s a module which offers a way to begin thinking about some of the world’s most urgent and complex issues.

I’m sitting in a coffee shop wearing a t-shirt with the slogan ‘save the future’. But what do we really mean by this? Can we save the future? Environmental campaigners and influencers are asking us to consider not only caring about our own children and grandchildren, but also about generations far distant.

The module looks at issues of justice as well as the issues of environmentalism. Western Christianity has a long history of caring for justice. Hospitals, healthcare provision, psychology (mental health care), global justice, and more, were all started through Christian initiatives. If we take following Jesus seriously, this is what happens.

One area, however, that has been woefully neglected, specifically in the last 400 years, is creation care: the mandate to care about the environment, and to consider that justice and the environment are inextricably linked.

This is not an optional extra; it is a fundamental part of what it means to be a Christian. We are shown through what Iain Provan calls the Genesis Mandate that creation is not something other, separate from us or God. It is inseparable from what it means to be a created being made in the image of a creator God.

One of the primary questions we asked in this module was, how does our perception change when we begin to experience the natural world as sacred?

In the light of this question, we need to reconsider our practices and how we’re living our daily lives to witness to the truth of the creator God we follow. More than simply using eco-friendly detergents, recycling and buying energy saving lightbulbs, we need to think about every aspect of our living in the light of God’s mandate for justice and creation care.

However, this is not straightforward. It’s overwhelming, complex and often confusing. We have many things to consider, and the answer is not always easy. For instance, what if we want to buy ‘ethically’ sourced clothing but we can only really afford to buy at Primark? What if we want to eat meat (and believe God gave us certain animals for such a thing) but given the abuse of animals, overproduction and the negative impact of the meat industry on the environment, we opt for vegetarianism.

There are so many questions and so many decisions, it can be paralysing. Through the module we consider practical ways to address these issues, and how we might offer a new way of living that reveals not only our care for creation but considers what it means to allow all made by God to flourish.

One of our students, Jo Howie, took our Make Good (missional entrepreneurship) module two years ago where she developed an idea for an ethical coffee business. She further considered the theological underpinnings of such a venture through the Justice and Environment module.

Most churches these days are signed up to Fairtrade, and so offer Fairtrade tea, coffee and sugars. In conversation with coffee growers in Brazil, Jo discovered that many local farmers were unable to pay the fees to gain Fairtrade certification, and could not afford the financial loss of the ‘middle man’ that still exists through the Fairtrade model.

This is not to say Fairtrade isn’t a viable option, but its model does exclude some small farmers who simply cannot afford the certification. Instead Jo deals directly with the coffee growers.

Last Monday, 19 July 2021, a dream became reality as the mayor of Derby officially opened the Sacred Bean coffee shop in Derby city centre. Here, Jo and her husband Darren and their team sell coffee roasted by Sacred Bean and bought direct from the farm in Brazil. This direct relationship model promotes personal relationships as well as a care for justice. It also minimises additional transportation and so cares for the environment.