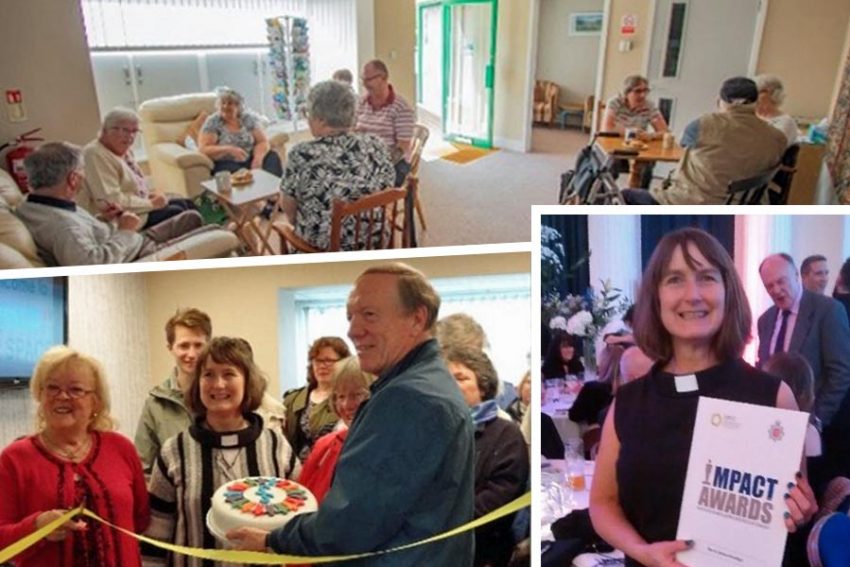 Community brought to life: the refurbushed interior of Sedbury Space (top); Janice and friends clebrate the re-opening in 2018 (left) and Janice Hamilton pictured with an Impact Award for Sedbury Space. 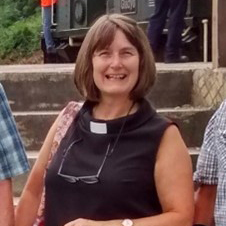 Janice Hamilton studied at CMS on the Pioneer Leadership Course from 2014 and was ordained as a Pioneer Minister in Gloucester Diocese in July 2017. Four years on, she speaks about the impact her training had in helping her to establish a Community Centre in a rural village.

Before studying with CMS I served as a youth and children’s minister in the parish of Tidenham, a rural suburb of Chepstow on the Welsh borders. At Soul Survivor 2011, God planted in my heart an overwhelming compassion for the community of Sedbury, a village within our parish that had significant deprivation but with which, as a church, we had had little connection.

In response to God’s call I began prayer walking the area daily for six weeks trying to discern how best to actively love and serve this community. Very soon, all sorts of opportunities began to arise, including incidental meetings with the Village Agent and local police officer, a couple of the ‘people of peace’ that God brought across my path. I also had the chance to get involved with the community youth club which operated two evenings a week in premises owned by the local housing association. I began to re-imagine the future of this place, thinking how this underused venue could be developed for wider community use.

Around this time I started training with CMS, having followed the C of E discernment pathway to become an Ordained Pioneer Minister. My home church employed me part time as a community minister two days a week to serve as a placement alongside training, which was invaluable for reflecting and applying all I was learning at college.

With the local police officer, I gathered together a group of local residents and facilitated a community consultation, based on the model of Asset Based Community Development. This was followed by a feasibility study into developing the premises as a community hub. Our aim was to provide an attractive and welcoming space to draw people together and encourage volunteering and participation, and hence develop greater community cohesion.

We established some collaborative partnerships, including with the District Council and housing and care agencies and recruited nearly 50 volunteers with whom we were able to begin setting up some much-needed support groups to supplement the community youth work, including a homework club and memory cafe.

We formed a management team, negotiated a 10-year lease from the Housing Association on a peppercorn rent and secured over £2,500 seed funding for initial start-up costs. A significant proportion of this came as a result of my pitch at the CMS Mission Entrepreneurship week at Pickwell Manor, a valuable experience which helped to refine and crystallise the ideas.

The building was well suited to this enterprise but after years of neglect and use as a youth club, it required significant refurbishment, as well as some remodelling to make it welcoming and accessible. We began a fundraising campaign to raise over £60K. Inspired by the Mission Entrepreneurship training this included a crowdfunding campaign encouraging local stakeholders and business sponsorship.

By the time I’d finished my three-year training at CMS, we had formed ‘Sedbury Space’ as a company limited by guarantee, registered as a charity and were well on our way to raising the necessary funds to realise our dream. Building works began at the end of 2017 and we re-opened the following June with a big community event.

The video below was produced by Barnwood Trust, one of our funders, soon after the re-opening, using Sedbury Space as an example of their ‘Beautiful Spaces’ programme.

Following ordination as Pioneer Minister in 2017, the Diocese of Gloucester agreed to my staying in Tidenham Parish for curacy to further develop the mission project with ‘Sedbury Space’.

Throughout, it’s been important to remember my role is that of community minister not simply a community worker.

When first ordained I wore my dog collar just to get used to it, assuming I’d ditch it after a fortnight. I was surprised at how useful it was, actually facilitating relationships and conversations rather than closing them down as I’d feared, so it remains a permanent part of my apparel.

Now, I essentially serve as a chaplain to the community centre. I have often been asked to offer a listening ear and to pray for and with those who engage with Sedbury Space. I have blessed a golden wedding anniversary ring, mediated between a rowing family and reassured someone facing a major operation that I’d be on standby for their funeral if required! I have also actually taken funerals for three families who, as one claimed, are part of ‘my flock’.

Eighteen months into my curacy, I felt led to launch a fresh expression of church called ‘The Well’ at Sedbury Space. This is a monthly, drop-in style of church with a short creative act of worship on the hour every hour, interspersed with chat and deeper life conversations, prayer, crafts and games, preparing and eating meals together. This fluid form of church emerged from reflecting on the ecclesiology module completed at CMS and its application to this particular context.

The Well ran for a year, with six folk, otherwise unconnected to church, becoming quite regular. And then we entered the national lockdown and it was put on hold as it didn’t translate easily online. In its place, to continue to minister to those who had begun to engage, and to reach out to others in need of spiritual support, I introduced a weekly Chaplaincy Chatroom, another drop-in session. It began on the pavement outside Sedbury Space as the second lockdown was imposed!

My curacy is now drawing to a close, due to end in July 2021 and over the past year my focus has been on succession planning so the pioneering work can continue in a more settled manner. I identified three roles that I’d inhabited that needed to be passed on – centre manager, chair of trustees, and the chaplaincy role. As we went into lockdown last year, Sedbury Space was in a position to recruit a part-time centre manager who has made a significant difference. A couple of months ago someone stepped up to become chair of trustees, an important role to hold the vision and team together. These last few months I am negotiating with my sending church to consider the future of the chaplaincy role and ‘The Well’ and we hope to recruit a part time community chaplain soon, depending on raising necessary funds.

Over the course of this venture, God, in his faithfulness, has provided all we need and raised up individuals with the gifts and skills to serve in different capacities as the need has arisen and I am trusting him for the future of what is clearly his remarkable story.

My future is now confirmed as I leave in August to take up a Community Pioneer Role in West Cheltenham. Reflecting on the past seven years, I get a sense that I’ve done a lot of preparing the ground and sowing of seed and I look forward to hearing the next chapters as others take a lead in the unfolding story of Sedbury Space and we see God continuing to work in this community.