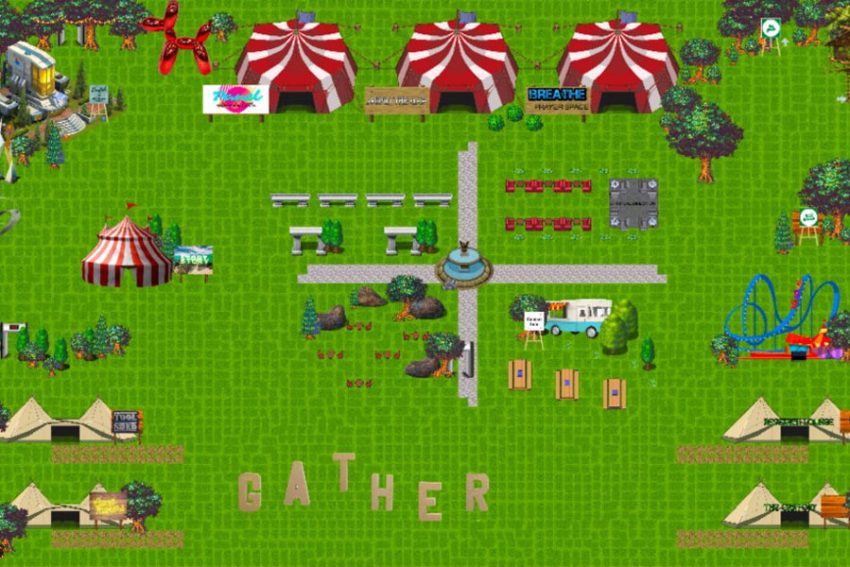 Gather brought together an international crowd of mission pioneers and interested others for a day festival like no other.

“This is the most bizarre festival I’ve ever been to!” said one Twitter user as she arrived at Gather, the CMS day-long virtual festival of pioneering mission.

The latest brainchild of the CMS Mission Education team replaced the usual in-person pioneer conversations day, where mission pioneers would gather at CMS in Oxford to discuss the latest learning and share stories of practice in their field.

Over 200 people at any one time gathered in an on-screen version of a green-field festival site. It captured the atmosphere surprisingly well, with an imaginative site designed by CMS pioneer course graduate James Fox-Robinson, using the Gather.town online platform.

The platform allows participants to create an avatar, a digital character which can walk through the site, enter different venues and engage with other people you are close to.

One of the delights of the day was that the format allowed for serendipitous “bumping into” people – often quite literally for the on-screen avatars. Video and audio become available when avatars get close to each other and at Gather there were plentiful private spaces to step into to have a conversation without being overheard.

With 10 programmed venues, there was a wealth of variety to choose from, with conversational storytelling spaces, short talks and discussion venues, as well as worship, prayer spaces and an art exhibition.

Jonny Baker framed the day in terms of Pioneer Practice – with the emphasis on the practical – so there was a Tool Shed venue, to share ways of making pioneering dreams into reality. This included Richard Passmore of the Northern Centre for Pioneer Mission sharing the Pioneer Tool Library Hack – free online library of pioneer tools to borrow and use.

Paul Bradbury and Tina Hodgett led people through an exploration of another tool, the Pioneer Spectrum, which has already been used for mission planning as far afield as Australia, and is now available as an online resource at pioneerspectrum.com

Richard Passmore also led a session with CMS mission partner Anna Hembury exploring how we can use the book Ghost Ship by Azariah France-Williams to become actively anti-racist.

A significant proportion of talks and discussion connected with the theme of racial justice, including talks by Harvey Kwiyani (“mission does not need empires”) and Lusa Nsenga-Ngoy on decolonised imagination, panel discussions on pioneering in multicultural contexts and research presentations on African indigenous movements as well as diaspora churches.

A lovely way to end the day, at the #CMSGather performance cafe, listening to music and creativity and even reading a few bits of poetry myself.

It does feel a bit like I'm in an 80s computer game! pic.twitter.com/7mRXUPqxwY

Another strongly emerging theme was that of imagination – and reimagining mission from the perspectives of contemplative action, ecology and rewilding, the outsider – here exploring conversations with pagans, and play.

The online format meant there was more opportunity for international flavour. Within about 10 minutes at the start of the day, I had bumped into people from Korea, Australia, Germany and Hampshire.

A panel on pioneering around the world focused in on two of those countries – Germany and Korea, as well as the USA and the Netherlands.

Theologian and missiologist Steve Bevans joined from Chicago to discuss his new writing project on the nature of the church as a community of missionary disciples. Sharing the platform with him was Melody Wachsmuth, who spoke about the winsome idea of curiosity as a tool of the Holy Spirit, as she described her journey into mission alongside the Roma people of south eastern Europe.

Additional spaces such as The Moon and The Beach (complete with rushing ocean sounds) proved popular and the event rounded off in true festival style with an evening of music and poetry, a quiz hosted by performance poet Harry Baker and sitting round virtual campfires.

Congratulations to Sarah Clarke and all the pioneer team at CMS and all the fantastic collaborators who made the day so inventive and stimulating.