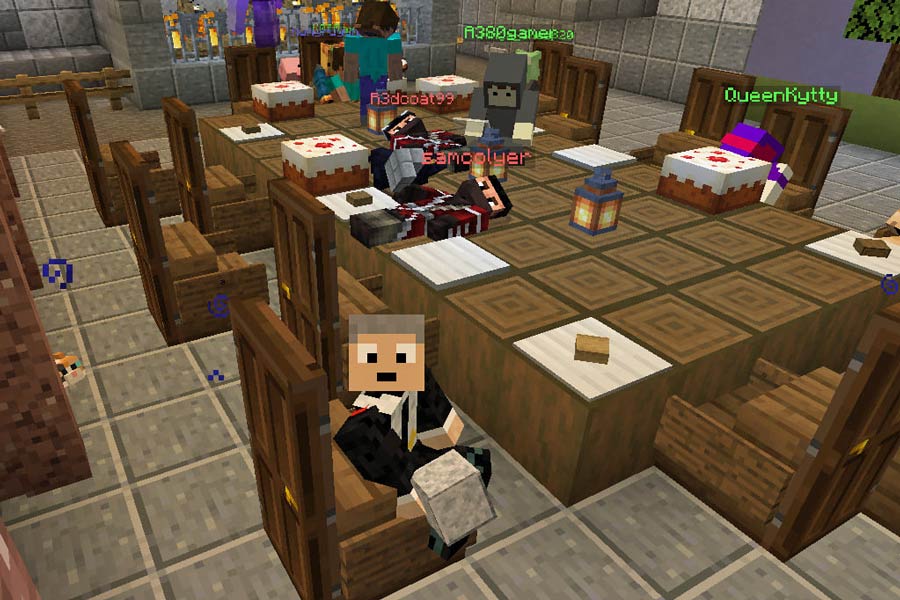 Minecraft is one of the most popular computer games on the planet, and now it is playing host to spiritual communities, thanks to a handful of mission pioneers. One of them is the Rev Kevin Colyer, as pioneer curate in Berkshire and a graduate of CMS Pioneer Mission Leadership Training.

I talked to Kevin about his journey into Minecraft Church and got an online tour of his Minecraft world, where he is building a rich community of players who are learning lessons about loving and caring for each other, as well as thinking about the kind of world they want to create.

When Kevin arrived at St Michael’s Church, Bray in Berkshire, six months into the pandemic, he wondered what on earth he was going to do, knowing nobody and with constantly changing Covid restrictions to negotiate.

A few months later, he is leading a weekly church gathering and building a community of 20–30 people, all within the virtual world of Minecraft – which allows players to build anything they can imagine in a Lego-like environment, and also to interact with each other.

“It’s got this open world that has just been so attractive to young people, particularly because they could just go ahead and just have a wild imagination and build whatever they like,” says Kevin.

Kevin, who is a graduate of the BA programme at CMS Pioneer Mission Leadership Training, first saw the spiritual potential of Minecraft in his own family.

“During lockdown I noticed that my eldest two were totally disengaged with ‘YouTube church’. And the only thing I could think of doing was saying to them, look, they’re doing the story of Joseph today: bring your laptops into the room here and work together, creating the story of Joseph and the dreams of Joseph in Minecraft. And they came up with this fantastic representation of the dreams of the baker and the wine taster.

“And for a long time I’ve been thinking I would love to be able to use this creative ability to engage with Bible narratives to explore stories more from the inside.”

So after talking with his supervisor, Kevin decided to try something out. Just before Christmas he set up a server to host a Minecraft community and held a Christingle service.

“Obviously you couldn’t meet to have one. So we thought, let’s build the Christingles in Minecraft. We had about seven of us that time and it was just brilliant.”

Kevin soon decided to do Minecraft Church weekly. “What I really wanted was to provide an opportunity for the kids themselves just to be able to meet other kids – to play – something that they’ve been so denied through the lockdown. And they were just desperate to do it.

“And actually, it’s one of the few environments where they could really play in a constructive, collaborative way.”

So how on earth does Minecraft Church work?

“I basically create a little mini-world online that we can then invite the kids to come and join and that’s open 24/7. But on Sundays at five o’clock, that’s when we say right, everybody come, we open up a zoom call as well so that we can have audio talk, because normally Minecraft is just text based, and it means you can far more concretely build relationships.”

Kevin sees his role as guiding the community along a Fresh Expressions journey: “We’re at the loving and serving part of the of that journey and building a community, starting to explore what discipleship looks like.

“We do it with a light touch, plenty of fun, but introduce prayer and also try and explore a story or something from the church calendar.

“So, taking Jesus from being baptised and going out into the desert and then, what’s it like being with Jesus during the 40 days he was in the desert? Well, it turns out in Minecraft at night, all of these baddies come out and attack you. And so we had one person playing Jesus and everybody else had to defend him against skeletons and all these evil creatures in the middle of the night, which actually added something very different to what’s just a couple of lines of the story.”

The highly stylised, blocky terrain on screen provides a surprising sense of physicality to the Minecraft world, as I discover when Kevin takes me into the game for a brief tour.

“There’s physicality to it,” he agrees, “even if it’s virtual, which is kind of the opposite to some of the things we do in prayer – when we’re physically present, but we just close our eyes and do it all ‘virtually’.

“I think it really attracts kids who have that kinetic thinking and they certainly seem to really engage with it.”

They say it’s a peaceful server

Kevin has gained plaudits from the young people for the professionalism of his Minecraft server – which came as something of a surprise. “But they also say this is a peaceful server. So they feel safe and they are very happy to be there.”

Minecraft church takes place in a “lobby world” that leads to an open landscape where members are free to collaborate and create the kind of world they dream of. The kind of place where you may walk into a prayer (literally) hanging in the air.

It is also a world where new creatures and events are “spawned” in response to actions the players may take. Sometimes events take a surreal but surprisingly biblical turn, as when Kevin put on an old World Wide Message Tribe track and encouraged his “congregation” to dance to the music.

“They started jumping up and down on this mountain,” says Kevin. “Then all of these parrots appeared because they’d spawned a load of parrots, and then dolphins… Then the lava came and before we knew it, the lava got out of control and this whole mountain was razed to the ground in two and a half minutes. And they were like, ‘Oh, wow.’ So through praise, they levelled a mountain. That sounds more biblical than anything we do normally with singing a little hymn in church!”

Thou shalt not Grief

But despite how real this online world clearly feels to the participants, can you build a real community?

Kevin is convinced you can. While there may be limits, there are plenty of opportunities to learn what it means to love and care for each other.

“I would say the most painful thing that happens when you play games together in this context is what they call Griefing. And I think the word grief is very well chosen. That’s when someone comes along and breaks something you’ve made – you just built something; it’s an artwork and someone’s come along and destroyed it, usually by blowing it up with TNT.

“There’s quite a bit of peacemaking and teaching people how to love one another in this environment – and so growing in discipleship like that, growing in a sense of spiritual awareness. We’ve got kids who’ve got no faith and you’ve got one Hindu boy, as well as kids from Christian families. So it’s really interesting seeing how they do that.”

The Gospel according to Minecraft

Kevin says there are direct links from his pioneer training at CMS to what he is doing now. “I’m calling it Minecraft Church, but I’m very deliberately trying not to form it into a preconceived idea of church. We take a lot of time in the BA thinking about the way Vincent Donovan brought the gospel to the Maasai. But he didn’t bring the shape of church. He very deliberately let that form.

“Actually what we do need to do is create a really loving Christian environment where we practise the commands of Christ in this virtual world, and then we think about how we can do that in the rest of our lives as well.”

Kevin is writing up some of his reflections on his experience that might help others do likewise. “This is something online that’s good and rich and hopefully will become even richer when you’re face to face.”

You can read some of Kevin’s reflections on the St Michael’s Bray Minecraft Community website, continue the dialogue in the comments below or connect with him at revkevincolyer@gmail.com