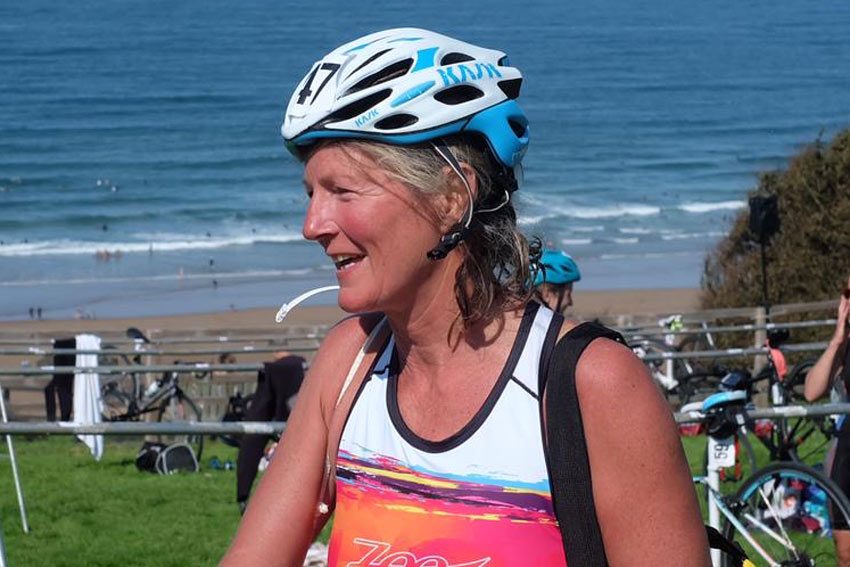 This month, I quiz second year BA ordinand Kara Maylor about her passion for joining in with what God is doing in the local community and journeying with Jesus in the great outdoors “whatever the weather”.

HH: Kara, I know you are passionate about everything to do with working with what God is doing in your community. I want to ask you about your interest in the great outdoors and your vision for a suite of projects under the banner of ‘whatever the weather’ – which works at many levels as in physical geographical weather and also the weather of the soul and person. But before we get to that, please tell me what you are doing at CMS?

KM: One of the first people that asked me about when I was going to respond to God’s call on my life told me about the idea of pioneering – she is now my spiritual director and was the one who encouraged me to go forward with the discernment process, assuring me I was not too old as I thought! I was introduced to Tina Hodgett, who is over the pioneers in our area, and it was she who told me about CMS. I then came for an open day and walked in the door and felt ‘at home’.

At this point I really didn’t believe that I would get accepted to train for ordained ministry but knew that even if I didn’t I would find the money to come to CMS.

HH: And how did you come to join us at CMS?

KM: Throughout my volunteering years in various churches I had often felt frustrated as I saw people losing sight of what Jesus modelled in his ministry and how people would become obsessed with the politics of how to do things and the minutiae and often felt like I was the odd one when I questioned these things. I also always felt that I wanted to be ‘with’ people where they are at and try to see what God was doing in their lives, and again that approach was often viewed with suspicion but as it is the basis of what CMS is built on I guess it is unsurprising that here is where I feel at home.

HH: I know you have the Friday group, a group of women that you have built up relationships with over a couple of years of running toddlers. You told me “None of the group are church goers but all happy to receive prayer and talk about spirituality.” Can you tell me more about the work and the plans?

KM: We were debating in our homegroup that it was a shame that although we had a good relationship with the local school that we didn’t actually really know any of the younger families in the village, as ours now were all mostly teenagers. How better to meet them than to run a toddler’s group? However, we all reflected on various toddler groups that we had been a part of over the years and none of us really enjoyed them as the coffee was never great, you spent half your time either running it or asking people to help and stopping your little ones trying to fight with others…not great memories! Having prayed about it, I and another girl felt called to begin one – but with brilliant coffee, toast and good snacks. And we were going to run it – one of us would help with the children while the other would sort out the snacks and drinks and then mingle with the parents. We had hoped to get help from our church family but were dismayed when we really didn’t get any help. Maybe this was a door shutting…so we waited a bit, prayed a bit more but still felt that this was what we were called to do and we would just have to get on with it and do it ourselves!

So, we did and over the last three years we have built up a reputation of being somewhere that the parents really look forward to coming to as the church is a great place for games with the little ones – hide and seek and bear hunt are favourites – the children really have fun and the parents get great coffee and food, and a listening ear. We ran it without any extra volunteers for the first year but then the church family began to hear about the difference we were making and started to volunteer and we now have two teams of people so we can alternate weeks. We were open from the start that we were happy to pray and talk to people about their beliefs and always would pray at the end. So, gradually, as we built up trust with the parents we have had so many discussions and walked them through many different life experiences over the last few years from the difficulties of parenting, through to bereavement, cancer and other life situations.

We recognised that there were a number of them that would ask questions about our motivations for doing this and would ask about Jesus and how that worked in today’s world. So ‘Thank God it is Friday’ was born – a number of us would meet after the toddler group, we would have a couple of minutes of silence (which everyone loves!), pray about any particular issues and then watch a short Rob Bell Nooma film. We would then have a short discussion about it and share lunch. We did this for a year and it has evolved into a less formal arrangement now where I meet with them in one of their houses – which was their suggestion.

They have been very interested in my whole process of discernment and the fact that at my age I am back studying and when I told them I was going to design a Bible study course with them in mind, if they were interested, they were all up for doing it and very supportive. As it is set around a series of walks, I am hoping that despite the pandemic we will be able to still run it.

HH: You told me you wanted to create a course that would move them towards a relationship with Jesus whilst experiencing the beauty of God’s creation.

KM: A writer that I have been inspired by is Michael Riddell. He says, “Participating in the mission of God means leaving our place of security to travel to the place where others are. This is the heartbeat of the incarnation, the movement of God outwards into the creation to stand with us in Jesus.”

My prayer is that by combining the beauty of being outside with an exploration of how Jesus worked with people, this will enable people to open their hearts to the power and love of the Holy Spirit and embark on their own ‘Journey with Jesus’.

HH: OK so back to the great outdoors. You told me that you live in a beautiful place that you have especially appreciated over lockdown. How are you going to utilise this with these “…busy women trying to balance career jobs, young families and their own ‘space’”?

KM: I am passionate about both God and his creation and love it that one of CMS’s key tenets is about seeing what God is doing and joining in with it. I am fortunate to live in a beautiful location and many of the people that I work with agree, which is why I have situated this course outside. Building on the thoughts of Martin Luther King who is well known for supporting the connection of God and nature with his words: “God is entirely and personally present in the wilderness, in the garden, in the field…he writes the Gospel not in the Bible alone, but also in trees and in the flowers and clouds and stars.”

When I swim, run or cycle with people they tend to share where they are at in life as sharing a passion for activities is such a good connection point.  Many conversations lead to me offering to pray for them and this has been formative in me discerning where God wants me to work.

HH: How can we pray for you and your work, Kara?

KM: I would appreciate prayers for all that God is doing in our area and that he empowers all of us daily with his Holy Spirit.