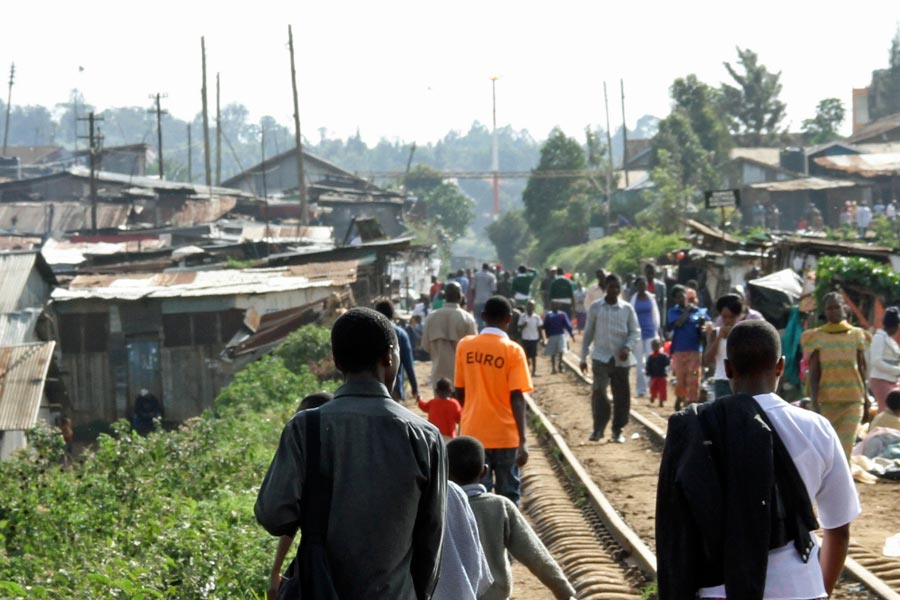 "The dust that clings to our feet..." Does our awkwardness about one biblical judgment scene subside if we re-imagine who is sending and who is receiving? (Image: Kibera, Nairobi, Kenya by Andrew Baughen)

Feeling awkward about judgment? James Butler re-reads a classic mission passage and re-imagines the scene from the bottom up.

The mission of the 70 in Luke’s Gospel, chapter 10, is regularly used to help us to understand mission and being sent. The suggestion that this is a model for our mission feels somewhat problematic. I’m happy with the sending, the not taking much, the speaking of peace, and the receiving of hospitality, but there has always been something about the way judgement is dished out at the end which has unsettled me.

The response I’ve often had to that question is that judgement will come to those who reject Jesus whether I’m comfortable with it or not. My response has been that the people didn’t necessarily reject Jesus, they just weren’t interested in the two people turning up.

The need to re-read

However, reading this again, in the light of the new issue of Anvil and an increased focus on issues of race and colonialism across all areas of society, I begin to see that this passage might need a re-reading.

Of course, the word “mission” has really only come about since the Jesuits, and then in Protestantism, with the modern missionary movement started by William Carey. Mission is being sent; in these cases, sent to the far corners of the world to tell the ‘heathen’ about Jesus.

I realise that subconsciously this is the lens through which I have read this passage; the powerful arriving in a place, expecting to be heard, and handing out judgement to those who won’t listen.

But, reading it again I found a different lens gives a very different picture.

Jesus collected together a bunch of nobodies and misfits as his followers. The people who were following him didn’t really expect to have authority. They didn’t expect anyone to listen. They were poor and marginalised as they went to these towns; ‘lambs amongst wolves’ (v3). They turned up to see how they were received.

They brought peace, and waited to see whether peace was offered in return. Would these towns feel too self-important to welcome them, to listen to what they said, to take seriously their message, to act generously towards them?

And I turned to the parable of the sheep and the goats in Matthew 25. The judgement was given and they were surprised to find that they had met Jesus in the poor, hungry and naked and it was on this basis that they were judged. The tables, then, are flipped.

This probably isn’t a story of the rich and powerful turning up, expecting to be listened to, and calling down judgement when they are not. Maybe it is a story of the poor, marginalised and excluded with a radical message of peace to those who are powerful. Perhaps even, that through the poor and marginalised, the kingdom of God has come near to them (v9).

The judgement then comes on the powerful, the self-righteous, the ones who think they know it all already and don’t need to listen.

The 70 aren’t the powerful church, the 70 are the ragamuffin group, the lambs among wolves, who have taken Jesus’ message seriously and have come to remind the powerful that there is a different way. This would suggest that mission is about recognising and receiving the surprise messengers that Jesus sent.

And I find myself asking again, how am I doing at noticing these ‘missionaries’ from God?

Am I too absorbed in my own ideas of God to be turned around by someone else’s message of peace from Jesus?

Or am I able to welcome them, and offer peace in return?