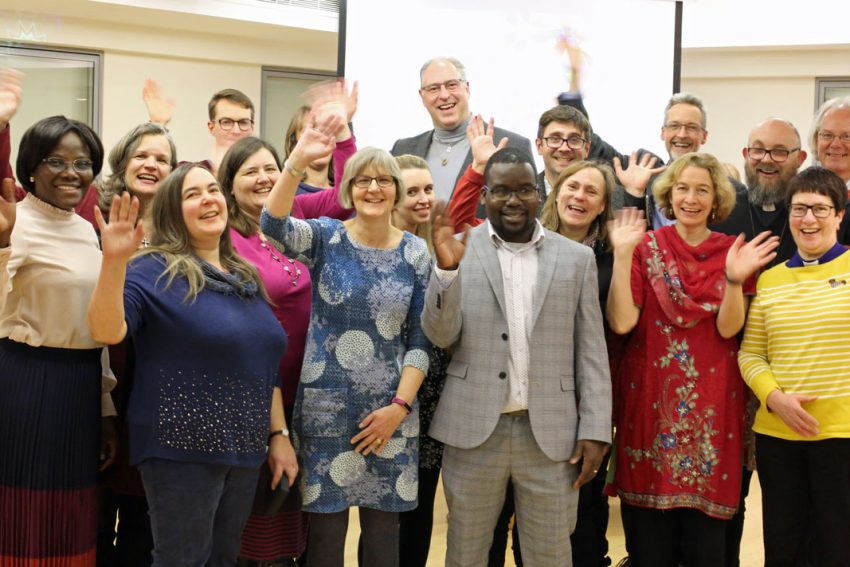 Huge congratulations to the graduates of CMS Pioneer Mission Leadership Training for 2019, who celebrated in kaleidoscopic style on Tuesday 4 December.

The traditional Advent image of a candle lighting the surrounding darkness was turned on its head with a non-stop display of changing pattern and colour for the celebration.

Friends, family and CMS staff joined the 27 graduates at a special service at CMS in Oxford on Tuesday. Among those awarded certificates, diplomas, postgraduate diplomas and MAs from Durham University were the first graduates from the children’s and families work and youth work streams.

Also present was CMS’s episcopal visitor, the Rt Rev Christopher Cocksworth, bishop of Coventry, who welcomed and anointed six people, three of whom were also graduating, as CMS Pioneers (who are either lay workers or readers in the Church of England).

Bishop Christopher said that admitting lay pioneers to an order of the Church of England was “the church saying we need this gift and we want this gift… A particular calling of lay pioneers is to keep helping the church to be what it should be – ‘apostolic’ – always in the mode of being sent.”

Against a backdrop of ever-changing projections, they both read from the Bible and reflected on the kaleidoscopic gift that pioneers bring to the church.

Jane read from Isaiah 43 in The Message, which she said could be a pioneer anthem:

Forget about what’s happened;
don’t keep going over old history.
Be alert, be present. I’m about to do something brand-new.
It’s bursting out! Don’t you see it?

She talked about her own pioneering work, as she seeks to take God onto the high street through her successful coffee shop, family-run as an overtly Christian enterprise. She has also been deploying her pioneer gift at the heart of the Anglican system as she has worked to challenge and transform her deanery synod, inspiring people to look beyond the local and see themselves as part of the global kingdom of God. Then there was a new worshipping community, which had so far involved Bible studies in the pub, a community garden and a musical jam night.

The kaleidoscope, she said was a great metaphor for pioneering: “As pioneers everything we do is part of the kaleidoscope of God’s kingdom. Every piece is unique and vital, without which the image would not be complete. Thanks to CMS I have come to understand that – to see my unique place in God’s world.”

James Fox Robinson also reflected on the metaphor of the kaleidoscope after reading from Ecclesiastes 9. “As you listen to your community you being to see patterns emerge and in collaboration with others create something new, that constantly recreates itself in response to every move of God.”

He then led the whole gathering in creating a new kaleidoscope, made up symbolically of all the colours in the room, which was then put into action on the big screen. It was described as “a prayerful metaphor for our community, whether you are staff, a graduate, family, friend or supporter, we all have a part to play.”