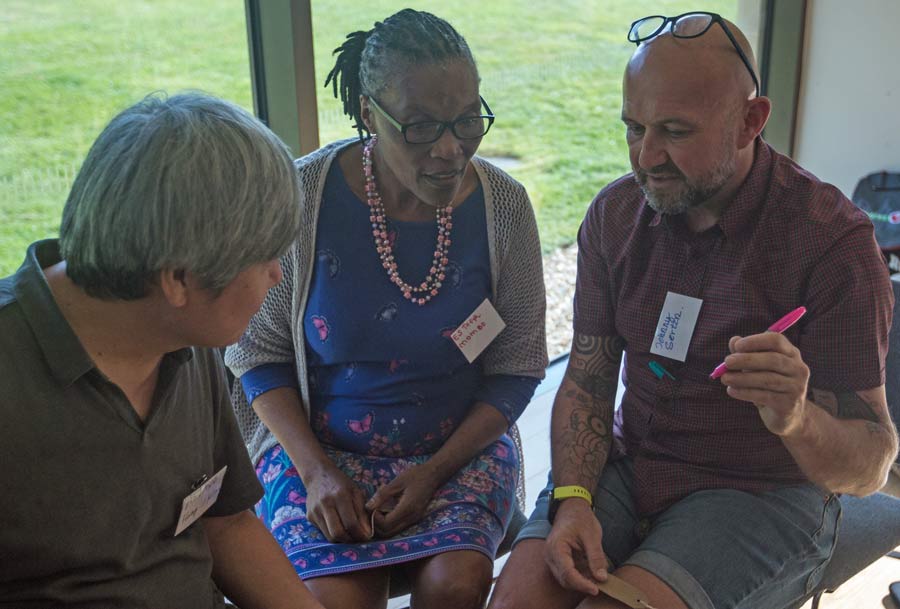 Ambrose from Korea, Esther from Kenya and Johnny from London sharing thoughts at the Hui

In the middle of July the CMS pioneer team brought together around 30 people from a variety of countries involved in education and training for pioneer mission and ministry for the Hui, writes James Butler.

Hui is a Maori word for a meeting. Cathy Ross explained to us at the beginning of our time together that a Hui was a particular type of gathering, sharing more than ideas, but our lives and communities – although she spared us the traditional setup of all sleeping together in the same room. We gathered at Ripon College, Cuddesdon, just outside Oxford. The sunny weather and Oxfordshire countryside combined for a stunning setting which encouraged a retreat-like atmosphere.

What followed was a stimulating four days of listening, learning, dreaming and innovating together.

It was a meeting of two halves – the first consisted of presentations and workshops where those gathering shared their experience of education and training for pioneer ministry and mission.

Personal highlights for me of this time were hearing about the ecumenical communities being developed in Germany by Maria and Sandra, the pioneer training that Sandy is developing for the Church of Scotland, and the resources that Mark has been developing in New Zealand to encourage missional discernment.

The second half of the Hui attempted to notice and develop the key themes arising out of the presentations, workshops and conversations that had taken place in the first couple of days.

Different themes were identified and groups formed around these different themes. The group I was part of spent time thinking about the kind of education and training which would be appropriate for ‘indigenous leaders’; those leaders from within the community or context where pioneers are working, who wouldn’t necessarily fit into or thrive within the more formal forms of training available.

This developed into a fascinating conversation and brought particular insights around theological education as gift – one which can help and resource, rather than distract or appear irrelevant – and how a syllabus could be re-imagined as a map, which can be navigated in different ways depending on the needs of the community and the leading of the Holy Spirit.

On the final morning each group shared its insights from its own conversation – which will hopefully be written up in some other form – and we finished, as we had started, by engaging in a creative time of prayer.

As is often the case with these kinds of gatherings, the conversations in-between the formal timetable were as important as the planned content. It was hugely encouraging to have time for deep conversations with a variety of people from different contexts and cultures. It was great to have time to learn from Henry and Esther from Kenya, Rene from South Africa, Fhabi from the Philippines, as well as people working in a variety of contexts; youth ministry, rural pioneering, missional church in New Zealand, to name a few.

Personally I felt challenged by the need to embrace the Missio Dei within Pioneer education. It is easy to get caught up in simply talking about teaching methods and techniques, and what the Hui reminded me was that the starting point for all of pioneering and mission is what God is up to through the Holy Spirit.

How can the discernment of what God is doing among us remain at the heart of all teaching and training?

There were a few clues that came out the conference, one was the importance of conversation; sharing and learning, particularly from those who are different and in different contexts from ourselves. Another was structured flexibility, like the syllabus map, which allows us to respond to what the Spirit is doing. It also became very clear that this was about a mutual and communal discernment – not the ‘teacher’ discerning for everyone else, but together spotting the clues of what God might be saying and where he might be leading.

Richard and Lori began and ended the Hui with an amazing interactive sculpture which represented different terrain – mountains, deserts, oceans or cities – and the challenges and joys of that terrain. We were all encouraged to bring something that represented a community we are part of and locate it within these different terrains, perhaps literally or more commonly metaphorically. As we journeyed through the Hui we remained aware of the communities we were part of, and as we prepared to leave we noticed the ways that our journeys might have shifted and the way these journeys had overlapped.

We had shared something of our lives and communities, we had learned from each other, and been inspired by each other and made some new friendships on the way.