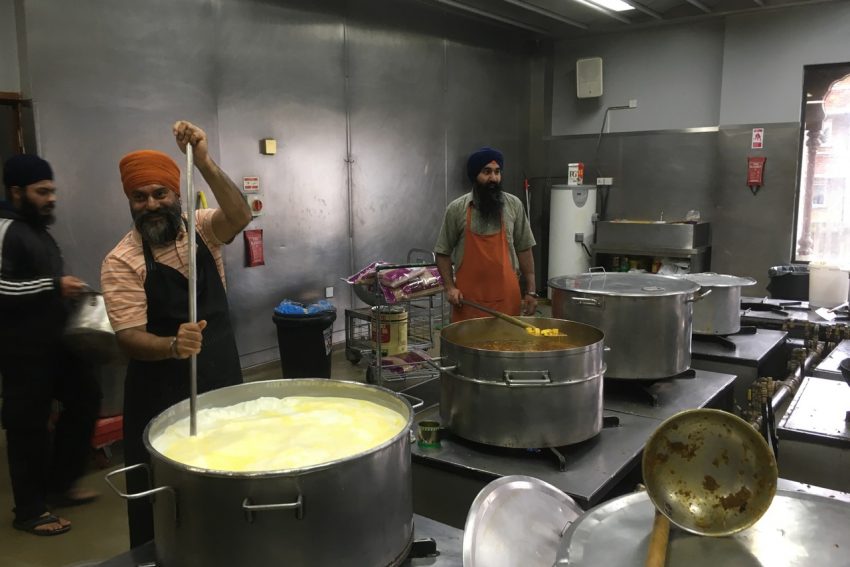 Whilst I had lived in Bethnal Green for 30 years and was happy to be returning to London for the weekend, little could I have expected the range of encounters that the weekend would hold; Messy Church, contemplative worship, a mosque, a Sikh gurdwara, a Hindu temple and a multicultural service of remembrance. We didn’t just experience diversity from the perspective of religion; we were treated to a wide variety of cultures receiving food and hospitality from diverse places including Afghan and Indian restaurants, temples and St John’s Church.

Most of the group arrived in time to help facilitate a session of Messy Church, based around the theme of ‘The Light of the World’. This was a great way to help us as guests of, and visitors to, the parish to ‘get stuck in’ and learn and observe as participants. A very impressive range of fun, creative, celebratory all-age activities that engaged about 100 children and approximately 80 adults. At the end of the activity session there was an act of worship which included a wonderful shadow puppet show of the creation narrative from Genesis, with many screams of delight as shadows of sun, moon and stars, plants and trees, birds, animals, fish and whales appeared as the story progressed. Then followed a meal for everybody that had been cooked and coordinated by Sikh women. The evening was a wonderful witness to what can be achieved when people come together in peace and harmony. My first key lesson: when we as Christians confidently, creatively and humbly profess Jesus Christ as God, it gives people of other traditions the chance to proclaim their own truths and to celebrate their own culture.

The King’s Centre and St John’s Church have been providing various education and training courses to diverse groups for several years. The team has been building relationships with the local community over many years, and this was made apparent as we toured the area with members of the ministry team at St John’s being greeted by members of every section of the community. We heard from a missional community that started nine years ago and has been exploring its emerging role in developing intercultural dialogue. My second key lesson was mission takes time.

Southall is an exceptional location of diverse religious buildings and communities, and therefore forms the perfect place for exploration and education of faith and inter-faith matters. Not surprisingly everywhere we visited had a distinctive theology and way of practising worship and prayer but there were some striking similarities too. Something that stood out to me was the genuine welcome we received everywhere we visited and the level of hospitality that was offered. This was particularly so at the Sikh gurdwara, here we were given a nutritious meal along with countless others in the Langar Hall, a place in the temple set aside for pilgrims to receive rest and nourishment. As we prepared to leave the gurdwara, a friend of the missional community previously mentioned came to bid us farewell and insisted on giving each of us a hug.

My third key lesson was that we are all pilgrims and that there is more that unites than divides humanity, and that where ever we go, God is there before us.

On Sunday the CMS group attended the civic act of remembrance and service held at St John’s. At the service there were representatives from all the major faith groups from Southall. Testament to the diversity of the area was the range of attendees from distinct cultural and religious groups. The refreshments served following the service ranged from sherry and mince pies to pakora, spicy samosas and tea, which were all served by the group from CMS.

To be plunged into a weekend of such cultural and religious variety provided much opportunity for reflection on mission and evangelism in pioneer ministry when set in a context of extreme diversity.

There is a need to continually unpack and understand culture before being able to minister into it, and this unpacking needs skilled facilitation that staff at the King’s Centre provided, and for which we were all grateful.

The most important reflection came to me over the course of the whole weekend. In visiting the diverse places of faith, there was much emphasis on the need for people to be able to demonstrate good works, to make the right and acceptable sacrifice, and to worship in the right way; little mention was made on the role of grace. This perhaps is the quintessential gift to the world from Jesus Christ, and the church shouldn’t be shy about saying so.