Two years on: the fight against FGM with Ann-Marie Wilson 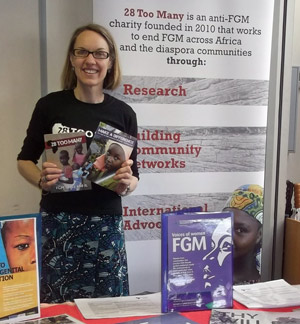 This month Helen Harwood checks in with occasional Pioneer student and CMS mission partner Ann-Marie Wilson to find out some of the struggles and champagne moments of her work to end FGM (Female Genital Mutilation).

HH: Ann-Marie thanks so much for agreeing to be interviewed a second time. Two years have flashed past since I interviewed you last! Can you give us a quick review of where you were two years ago?

AMW: Two years ago I was completing five years of study (a degree at All Nations; a TEfL course; a gender based violence counselling course; midwifery and fistula training) supplemented with two modules of the CMS Pioneer Mission Leadership Training course. I was also gaining experience in FGM related issues with the NHS, Met Police, NGOs and the Home Office. I had a clear vision of what needed to be done and how I could make a difference. 28 Too Many was just beginning as a ‘project’, and I had a few remotely based volunteers contributing to the team. I was still partly self-funding my work as I started to raise funds to support me and the project.

As you looked to the future (back then) what had you hoped at this point to have achieved?

From day one, 28 Too Many was chosen as our name, as we were aware there are 28 African countries where communities still practise FGM. I believed if we could research the situation in each of those countries and share the results in a country research profile; the data could be used to show the ‘current’ situation. We could then monitor progress over time, and show how FGM was declining due to programmes, networking activities and sharing good practice. We hoped we could make a minimum reduction of 10 per cent in FGM in 10 countries over 10 years – and also affect change with global government, UN and faith leaders. We also hoped to make a difference in diaspora communities such as the UK.

What have you managed to do from that list and what other things (if any) have you also achieved? Are there any other things that were added to your internal ‘to do’ list?

Thanks to the tremendous support of many people we have made unbelievable progress in the last 2 years. Highlights include:

Were there things you did not manage to do or things along the way you hoped to complete and couldn’t?

I’m not so sure that we didn’t achieve things we set out to do – it’s more a case of needing to be flexible and adapt. We are a small organisation and new charity so we needed to establish a reputation and help people understand our vision. It is always hard starting a new charity and even more so given the tough economic climate over the last few years. We have had to be very creative in how we do things and be prepared to take on new challenges. Each of the charity managers has had to learn on the job and take on new challenges from designing a website to managing remote volunteers; researching FGM in Africa to producing fundraising bids; creating networks in Africa to speaking overseas.

An example of a frustration could be overcoming the prejudices and stereotypical media coverage of FGM. We are passionate about dealing with FGM in a respectful way and not exploiting those who have undergone FGM and presenting them as victims. We recently interviewed three women and our goal is to enable them to find their own voice and help others by sharing their stories that show their great personal strength and courage. This is not always what media editors wish to print.

I am sure that the work never stops – but are there shocks along the way as things seem to go backwards, and are there those mini and major triumphs where you want to crack open the bubbly?

Unexpected challenges included a donor pulling out, which has a huge impact on a small charity and resulted in our having to reorder some priorities. Yet as one door closes another opens and other offers of help meant we could keep on track.

FGM is such a big problem affecting over 40 countries globally, with 140 million women living with FGM and three million affected annually, with horrific consequences for so many of those affected. It can be overwhelming, but then we think of a particular story – like the two girls in Kenya who walked eight hours a day to go to and from school, learnt of FGM and ran way to avoid it and, on being reunited with their parents, they helped eradicate FGM from their village. A community of 200 now has lived FGM-free for six years – no girl younger than 18 has been cut. This makes it all worthwhile. Saving one girl from FGM can be the beginning of a change which can lead to better lives for many, for generations to come.

How has contact with CMS and the Pioneer Mission Leadership Training course helped and sustained you over the last few years?

I have made some excellent friends and mentor/tutors on the Pioneer Mission Leadership modules. I have remained in an action learning set where four of us meet up to four times a year. These give support for the highs and lows which invariably come with pioneering. I also met up with a group from the course when I spoke at The CMS Kitchen at Greenbelt this summer, which offered a good time to reconnect with old and new CMS friends. I hope to offer a talk to the CMS degree course in the next few months – giving some tips and opinions as to what has worked for us on the journey so far! CMS also helps offer me support with skills training and help – so I will be going to a conference in Africa in February and to All Nations in the summer. In exchange, I get the privilege to give talks to CMS groups around the UK – in Northampton, Wales, Sheffield and Yorkshire this last year!

What can we pray for and what does the future hold?

We are shortly to publish our first Country Reports on FGM in West Africa (Sierra Leone and Liberia). FGM is taboo in these countries, so please pray for our reports to be met well. Also pray for our work in the diaspora; my trip to East Africa in the spring and our team of 30+ managers, volunteers and Trustees. Finally, please pray for our teams overseas in Mali and Senegal. We want a day when a girl will not have FGM every 10 seconds in the world. Do help us make that happen.