Church For Every Context 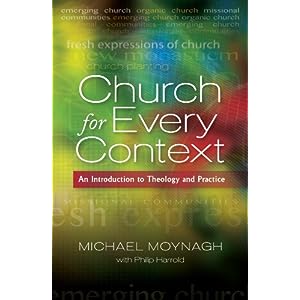 Church for Every Context is quite an extraordinary book. It has been a huge project for Michael Moynagh and Philip Harrold (the guy with his name in small print on the cover – I am never sure exactly what that means or what his contribution has been?!). I happen to know because CMS are in Oxford that Mike has been hidden away and avoiding meetings for the last year and a half whilst working on this. Hopefully he’ll now reappear in public! It feels like a lifetime’s achievement – I say that because Mike has reflected on issues of mission and culture and church for decades and it is as though he has taken all that learning, content and wisdom and crafted it into this book.

Steve Bevans, a personal hero of mine, and the don of contextual theology gives it a ringing endorsement on the back cover saying that if you want to be a member of the church today you should read it.

What I am particularly happy about in relation to the book is that contextual mission  is the language and the framing. This is gold as far as I am concerned. I was at a gathering of theological educators recently and over a mealtime discussion one lecturer from an evangelical college said across the table to someone from a more progressive/liberal college something along the lines of ‘we’re into the bible but you’ve got contextualisation’. I nearly choked on my meal. It was the most absurd false dichotomy I have heard in years. Mike’s background is evangelical and charismatic. So it’s wonderful to have someone from that tradition laying out a contextual approach. (As an aside I have just read Contextual Theology: The Drama of Our Times by Paul Matheny that any evangelical who holds to the view above should read – the majority world church are strongly advocating contextual theologies and a much more serious approach to the bible and how it relates to lived faith than our often abstracted so called biblical approaches in the West. They have had enough for a long time now of our imposed takes as certainties! I’m in danger of a rant so will get back to the review.)

It’s a big book – getting on for 500 pages – so it’s quite hard to know how to do a review that actually grapples with it. So a few comments will have to do.

It surprised me. I don’t know what I was expecting but I wasn’t quite expecting something this good or this comprehensive or this framed by contextual mission. In part I think this is because in my own experience evangelicals are so often afraid or reticent of contextual approaches (and I have no idea why!). I found myself really liking what was being laid out.

I love the way Mike weaves in a lot of theories from disciplines other than theology. For example he introduces complexity theory, emergence, network theory and so on. Some theological purists don’t like this but I always think this makes for a much richer conversation and opens up some interesting ideas. It’s a sort of practical theology approach. To give an example he uses complexity theory and self organising systems to talk about how systems recombine elements to reshape an organisation and comes up with the idea of semi-autonoumous corridors being created within denominations in which new contextual communities can emerge and relate. So CMS as a religious community is a corridor in the C of E, Venture FX in the Methodist church is another. This approach means that if you feel like you know about contextual mission and so on the book will have lots of new nuances and combinations that will spark your imagination.

His theological discussion around church and mission draws particularly on the missio dei, participation in the Trinitarian life of God, the kingdom of God, and the catholic notion of church as a communion in mission. This is very conversant with conversations in missiology circles, drawing on orthodox, evangelical, catholic, and other writers. It’s not comprehensive by any means and of course he draws on his own tradition the most but it has some exciting threads. This of course (like everything) is contested and I suspect may be the section that others get into conversation with the most in the academy. But there is a generosity of sources – to have Moltmann, Clay Shirky, Newbigin, Bevans and Schroeder and For the Parish as some books for further reading in that section made me smile. I have personally come to talk of the church as communion in mission recently as the best language I can find around ecclesiology. I was intrigued (and hope there is a book to follow) by Steve Bevans throwaway line in his endorsement that there is no such thing as ecclesiology, only contextual understandings and practices of church.

The practice section is really helpful. I suspect lots of practitioners will be turning things up in there on a regular basis. Mike says it is not a blueprint, not the answer, but a series of hypotheses and experience based wisdom. This is the sort of language I would like to hear more of – a generous offering of wisdom for others to take, chew over, try out, and enrich through their own practice. Mike is also keen to point out that there are practices we can learn and pay attention to such as researching a community, listening, developing team, developing funding plans, reflecting, engaging with partners and so on. He is also keen to point out that there are a range of ways contextual churches do and can emerge and a range of sorts of people/pioneers rather than one sort of person who can do this. Again this makes good sense. There are two broad models Mike describes for how things emerge – from a worshipping community, and beginning with service. I think there is probably a third kind of practice that I observe with some pioneers which contains much less focus on developing a church community as an outcome – perhaps more akin to a community chaplain, or a worker priest or something – what Simon Sutcliffe describes as being a guest, a wanderer, a sodal pioneer. But I can see that fits less with the title of the book.

The last section contains lots of wisdom too in areas of discipleship, worship, sustainability, and community.

Get a copy if you are involved in any way in this movement as practitioner, an enabler, an advocate. Don’t let the size put you off as you can dive in to the relevant sections for  you.

Thanks Mike and Philip – a wonderful service you have done by writing this book. My only gripe with the book actually is not with the book but with some of the advertising rhetoric I have seen for the book by Fresh Expressions who are in danger of selling this as the answer, the theology, the approach. This of course undermines the very concept the books sets out of being contextual! And the book itself has a much more humble posture and tone. I hope that many people dialogue with what is laid out in the book and enrich the conversation and experience based wisdom we are all trying to learn from as we seek to follow Christ into the future. And may there be many more contextual churches that emerge as a result.